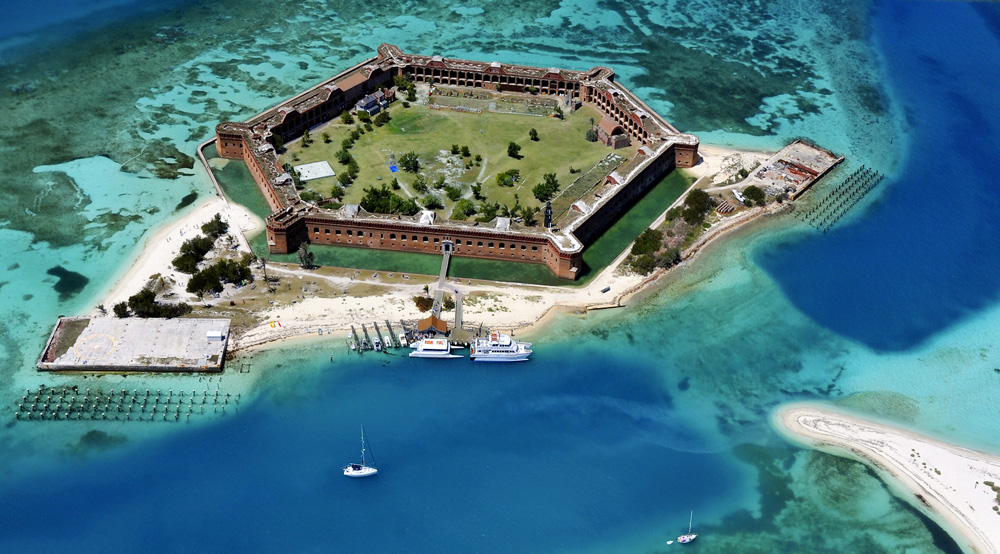 Seventy miles west of Key West lies Dry Tortugas National Park: the uninhabited Dry Tortugas islands and Fort Jefferson, a natural wonderland and important historical and cultural site. This group of small keys and semi-submerged sandbars currently includes seven islands and shoals: Garden, Loggerhead, Bush, Long, East, Hospital, and Middle Keys. In centuries past, the form and number of the Tortugas has varied, but the area has always attracted the attention of explorers and mariners. The Dry Tortugas received their European name when Spanish explorer Ponce de León first visited the area in 1513. He named the islands Las Tortugas after his men took 170 sea turtles from the beaches and waters to use for food and ship’s provisions. Later, “Dry” was added to the name to indicate the complete lack of water on the islands.

The Dry Tortugas lie along the edge of the main shipping channel between the Gulf of Mexico, the western Caribbean, and the Atlantic Ocean. This strategic location made for heavy marine traffic through the surrounding waters beginning with the earliest Spanish explorers and merchants traveling along the Gulf Coast. After the young United States acquired Florida from Spain, the islands’ important location attracted the attention of the U. S. Government and the Navy, and it was decided that the islands were a good location for a lighthouse that could guide ships around the area’s many shallow reefs and small islands. A site was chosen on the island called Bush Key, later renamed Garden Key, and the Garden Key Light was completed in 1826.

In May of 1829, Commodore John Rodgers anchored at the Dry Tortugas to evaluate and report on the harbor and the potential for the islands as a military outpost. He reported that there were 11 small keys and surrounding reefs and banks that offered outer and inner harbors and afforded safe anchorage at all seasons. The harborage was large enough for a number of ships to ride at anchor, deep enough to be navigated by ships-of-the-line, and protected by a narrow entrance of not more than 120 yards. Rogers noted that a hostile power could occupy the Dry Tortugas and threaten United States shipping in the Gulf. However, if occupied and fortified by Americans, the islands would constitute a valuable advance post for the defense of the Gulf Coast.

After engineering studies and various bureaucratic delays, the construction of Fort Jefferson was begun on Garden Key 17 years later, in 1846. The new fort contained the existing Garden Key lighthouse and light keeper’s cottage. It had six sides and four tiers, large corner bastions, and emplacements for 1,000 heavy guns. The guns sat inside the walls in a string of open gunrooms that featured large seaward-facing embrasures, making Fort Jefferson into a massive gun platform that could destroy any enemy vessels that came within firing range. Living quarters, powder magazines, storehouses, and other buildings were sited on the parade ground, protected by the fort’s brick walls.

Although the fort was occupied by almost 2,000 personnel at its peak, and used throughout the Civil War period and into the early 1930’s as a military installation, a military and civilian prison, and a quarantine hospital, the fort design was never fully completed. The incredible weight of the brick outer walls and the hundreds of cannon on the fragile limestone island caused problems with subsidence, and the constant need for maintenance and lack of fresh water were also major difficulties. However, the unfinished fort is still the largest masonry structure in the United States.

Now, Fort Jefferson is a fascinating historical site and a rich nature preserve. The Fort was designated as a National Monument by President Franklin D. Roosevelt on January 4, 1935, listed on the National Register of Historic Places in 1970, and included in the Dry Tortugas National Park established in 1992. A visit to the Fort is a must for military history and Civil War buffs, while the surrounding waters and keys offer world-class snorkeling in a pristine environment, renowned bird-watching, and excellent fishing.

It is easy to reach Garden Key via the daily runs of the Yankee Freedom III Dry Tortugas Ferry. The Yankee Freedom is a high-speed ocean-going catamaran specifically designed for the run from Key West to the Dry Tortugas. At 100’ long and 60’ wide, it is a very stable and safe vessel that can easily accommodate the normal passenger load of 150 in luxurious comfort. Go over for an exciting day of exploring in and out of the water and have the experience of a lifetime. Or, for the real adventurer, bring your camping gear aboard the ferry for overnight camping at The Garden Key Campground. This primitive yet beautifully-located campsite is just south of the fort, and is perfect for enjoying beach and water activities, amazing sunsets, starry skies, and silent nights after the day visitors have gone.

Whether you are up for an active day trip, or a beach camping expedition, the Dry Tortugas and Fort Jefferson make a fantastic addition to any Key West holiday itinerary. Inside Key West has all the information you need to plan a perfect trip to this natural and historical treasure, and secure booking facilities that make getting your place aboard the Yankee Freedom a snap. Don’t miss the chance to explore one of America’s wonders.