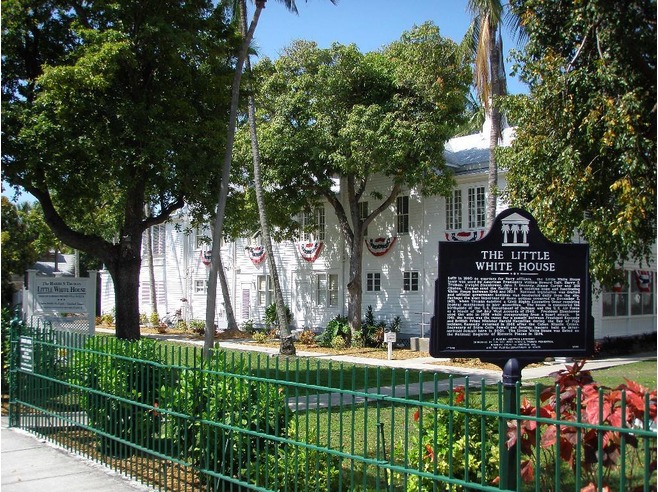 American history buffs and anyone interested in the lives of US presidents or tales of old Key West will want to spend an afternoon visiting the Harry S. Truman Little White House at 111 Front Street in Key West. Originally constructed in 1890 on the island’s western shoreline, the building was the first officer’s quarters on the Key West Naval Station. As the years went by, the building hosted many interesting visitors and important events. Now, it has been restored to appear as it was in 1949 when President Harry S. Truman was using it as an escape from the pressures of Washington DC, much as US presidents now use the Camp David retreat.

The house was sited directly on the waterfront when it was built, but subsequent creation of more land by filling to the seaward, and construction of more buildings on the seaward side resulted in the building’s setting as it appears today. It began life as a wooden duplex that housed two dwelling spaces: Quarters A for the Naval base commandant and Quarters B for the paymaster. In 1911, the building was converted into a single-family dwelling dedicated solely as housing for the commandant, and fill was added to extend the land in front of the house.

William Howard Taft became the first president to visit the house when he arrived in Key West in 1912 via Henry Flagler’s Overseas Railroad en route to inspecting ongoing construction at the Panama Canal. A few years later, during World War 1, Thomas Edison came down to Key West to give his service to the war effort, and lived in the house for six months while completing 41 new weapons. The house continued to serve as US Command Headquarters through World War II.

After the close of World War Two, in November of 1946, President Harry S Truman had spent 19 months in office, all of it during wartime, and was physically exhausted. Ordered by presidential doctor Wallace Graham to take a rest in a warm place, Truman immediately headed for Key West, arriving on November 17th. After resting for a week, he left on the 23rd, promising to return whenever he needed to rest. It was not long before he did return, from March 12th to the 19th in the spring of 1947. This was the beginning of a pattern that lead to 9 more visits to the island, always around November-December and March-April.

When technological advances made it possible for the President to communicate with multiple world or political leaders at one time, or summon staff from Washington in a matter of only 3 hours by air, Truman recognized that wherever the President was, the White House was. Cabinet members and foreign officials were regular visitors for fishing trips and poker games during Truman’s visits. President Truman also conducted many important items of presidential business in Key West, and documents issued from the Little White House bore the letterhead of The White House, US Naval Station, Key West, Florida. In the end, Truman visited Key West 11 times while in office and spent 175 days of his presidency in the house.

Later presidents including Dwight D. Eisenhower, John F. Kennedy, Jimmy Carter, and Bill Clinton also made use of the Little White House, and the house stayed in service as the Naval Station commandant’s quarters until the submarine base closed in March of 1974 when the Navy made the transition from diesel to nuclear submarines. The Little White House was added to the National Register of Historic Places on February 12 of 1974, and today, the building is a small museum and tourist destination filled with original furnishings and presidential memorabilia from the Truman era. The Little White House is Florida’s only presidential site, and after undergoing a $1 million dollar restoration completed in 2009 for the celebration of Truman’s 125th birthday, it is definitely one Key West’s must-see museums.