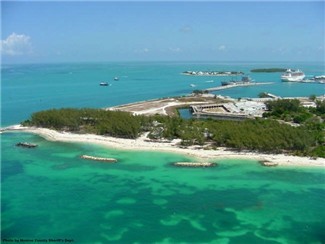 For the first stop in our series on Key West public beaches, we visit the southern tip of Key West. Here we find a large, relatively undeveloped, partially forested patch of land surrounding Fort Zachary Taylor, a historic, pre-Civil War brick-built fort that originally sat on an offshore island connected to the mainland by a walkway. The fort and the land around it comprise 87-acre Fort Zachary Taylor State Park, which includes what the locals call Fort Zach beach, probably the most popular of the Key West public beaches. 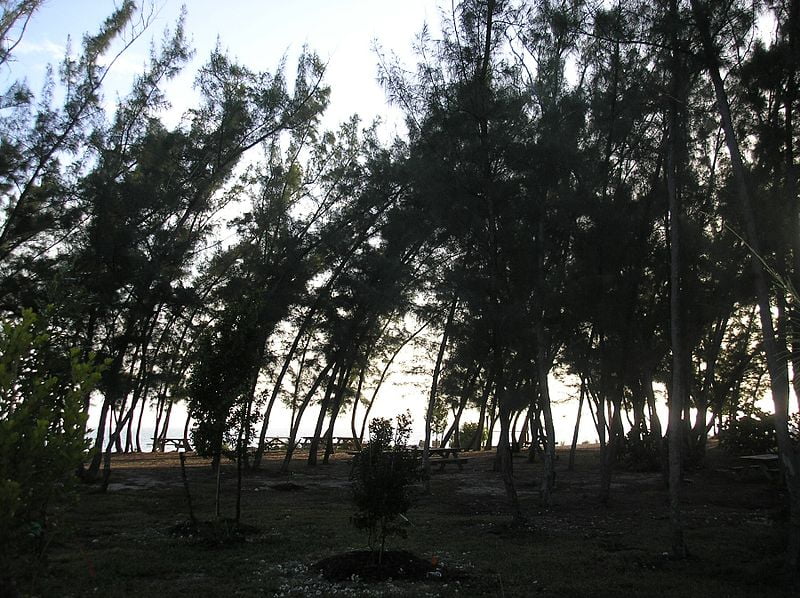 Picnic area at Fort Zachary Taylor State Park
While Smathers beach may top it for sheer length, Fort Zach offers a more natural setting, with a lengthy, scalloped main beach backed by a broad open space and nice grove of shady trees. Around the point at the western end of the beach, and in front of the fort, a rocky shoreline borders a large open meadow area crossed by walking trails. The main beach fronts a sea bottom that begins shallow then slopes gradually away to the deeper waters of the main GulfAtlantic ship channel running between the western tip of Key West and the small Keys, sandbars, and shallows of the Key West National Wildlife Refuge a few miles to the west.

Inner Yard at Fort Zachary Taylor and the Key West Main Ship Channel
This positioning near the ship channel, a main migratory route for fish moving between the Gulf and the Atlantic, means that Fort Zach beach offers excellent snorkeling potential when water conditions are favorable. The nearshore waters are protected, easy and safe for beginners. Further out, experienced snorkelers, free-divers, and SCUBA divers can enjoy interesting underwater terrain and the possibility of seeing larger fish along the edges of the channel. The proximity to the channel also makes this beach good for fishing, which is allowed, and a stone jetty at the west end of the main beach is a good spot to try casting some bait out toward the deeper waters.

Fort Zachary Taylor Park is also known for bird watching, as it is a landfall for many types of migrating birds, and home to several native species. The park area is the first dry land that many northward-flying migrant birds see after crossing the water from points south, and the last feeding and resting opportunity for southward migrants in the fall. Surprising numbers and varieties of avian visitors pass through Fort Zachary Taylor Park. Bird watchers will find that the pine forest, open meadow, saltwater moat, and seawall and breakwater on the north side of the park all offer opportunities to spot many types of land and seabirds. 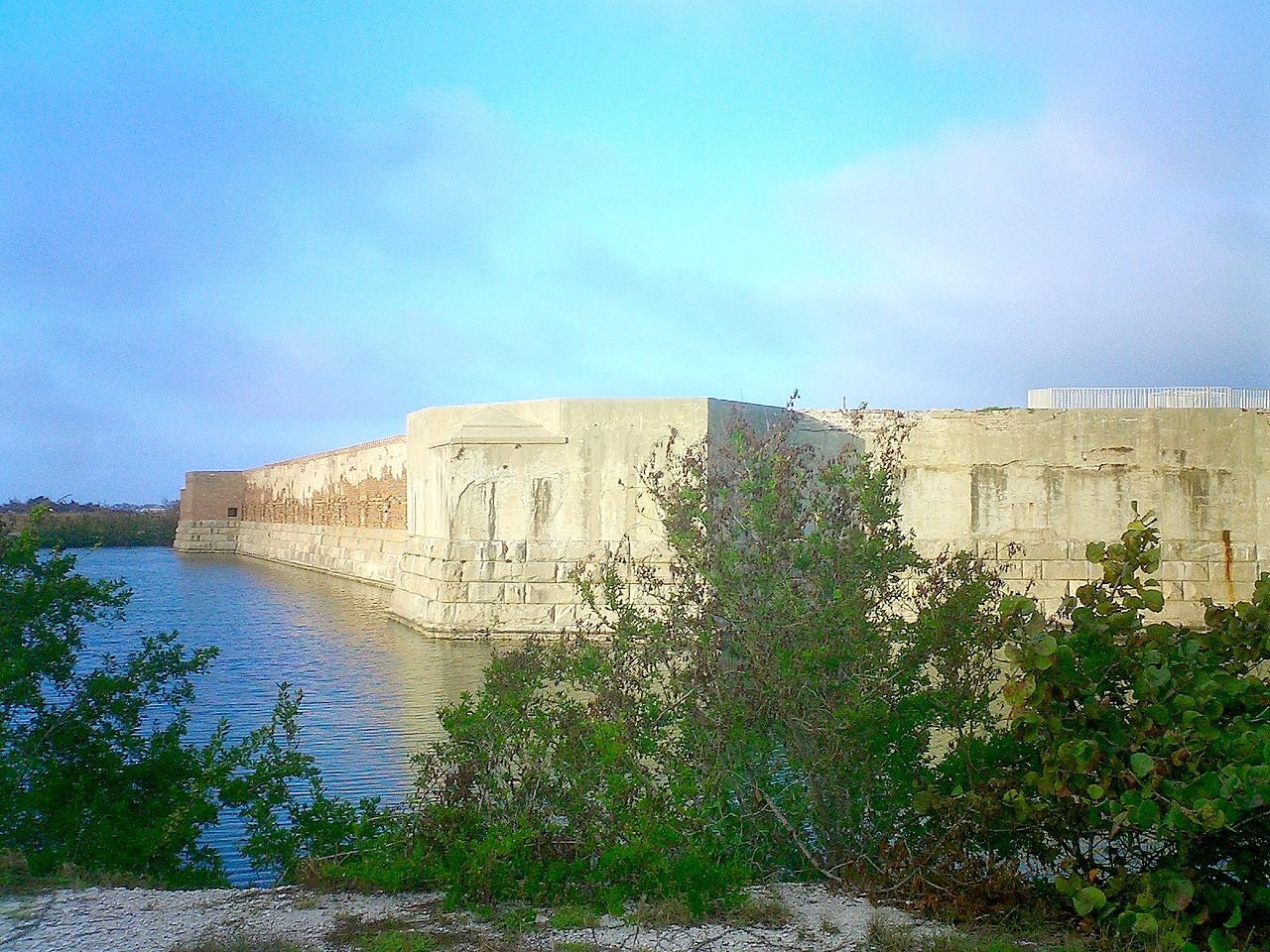 Fort Zachary Taylor and Saltwater Moat
Besides the beautiful natural setting, the other highlight of this beach is Fort Zachary Taylor. One of several forts built in the mid-1800s to defend the southern coastline of the US, it was completed in 1866 and played important roles in the Civil and Spanish-American wars. The fort was taken out of service in 1947. In 1968, excavations produced the nation’s largest collection of Civil War cannons and Fort Zachary Taylor was designated a National Historic Landmark in 1973. The fort offers daily tours, and will certainly be of interest to any Civil War or US history buff.

Although the park does charge an entrance fee ($2 for pedestrians and bicyclists plus a 50¢ per person County surcharge, $4 for a single-occupant vehicle, and a carload deal of $6 for 2-8 people), Fort Zach beach is well worth it for the beauty and the amenities it offers. Besides the activities already described above, visitors can enjoy a short nature trail and cycling within the park. The beachfront Cayo Hueso Café offers snacks, cold beverages, beach sundries, and souvenirs. Public restrooms, picnic tables, barbecues, and beach equipment rentals provide all the necessities for a full day of seaside fun. 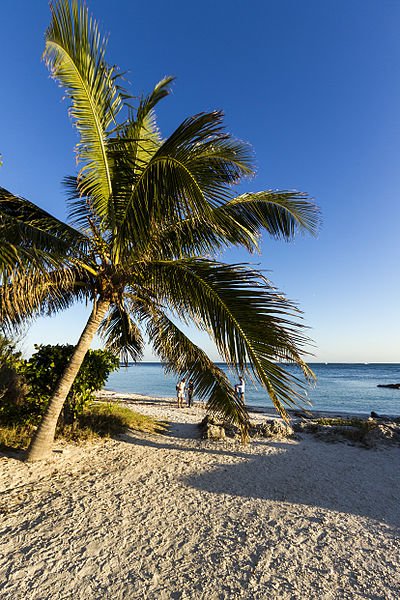 Fort Zach Beach
Fort Zachary Taylor, Florida’s southernmost state park, offers a beautiful beach in a natural setting, a safe waterfront, plenty of room to explore, and many things to do. It is my call as the best choice on the island for anyone craving a long day at a spacious beach and is especially ideal for a relaxing and fun family day trip.

Fort Zachary Taylor State Park, Florida’s southernmost state park, is located at the southwest tip of Key West off Southard Street. Besides being home to a beach that many claims is Key West’s best, the park holds one of America’s most fascinating pre-Civil War historic sites: Fort Zachary Taylor. The fort and the park, called Fort Zach by the locals, is one of the island’s hidden gems. It is not very well known because it is tucked away on the waterfront behind the Truman Annex, not visible to drivers or pedestrians, and only identified by a small street sign. However, the fort is among the most important of Key West historic sites and is certainly worth a visit by history buffs, those looking for an interesting and educational family day trip, and visitors in search of the best beach on Key West. 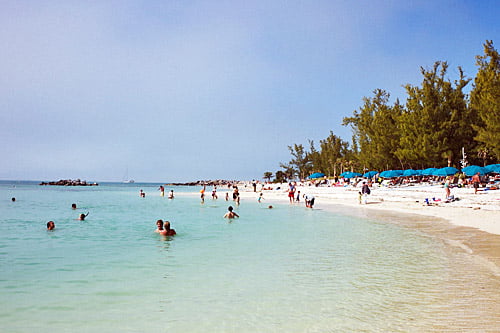 Fort Zachary Taylor is a large, trapezoidal masonry fort built as a naval gun battery emplacement to guard the main ship channel that gives passage between the Atlantic and the Gulf off the west tip of Key West. The fort was originally positioned about 1,000 feet offshore and connected to the mainland by a walkway. Years of silt build-up in the harbor, the creation of the Truman Annex, and the disposal of material from the dredging of the main ship channel in the 1960s left the fort surrounded by land except for a moat across the seaward face. Development of the area and the creation of a beach resulted in the current 87-acre park associated with Fort Taylor.

Construction on Fort Zachary Taylor began in 1845 as part of the United States’ ongoing exploitation of the natural defensive location of the Florida Keys. Like its companion Fort Jefferson 70 miles west in the Dry Tortugas, Fort Taylor was surrounded by water, protected by heavy masonry walls, and had two levels of gun rooms. Another similarity between the two forts is the series of beautiful archways opening into and dividing the gunrooms. These were the work of Irish and British master craftsmen, practitioners of the now-lost art of building castles and forts from stone and brick. 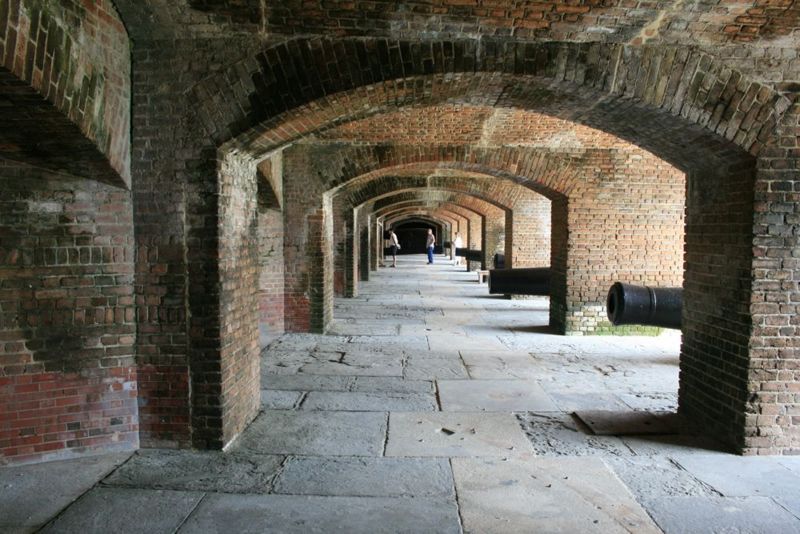 In 1850, the fort was named for President Zachary Taylor after his sudden death in office. Slowed by materials shortages caused by the need to ship bricks and granite in from New York, hurricanes, and Yellow Fever epidemics, construction of the fort took 21 years. In 1861, at the beginning of the U.S. Civil War, Union Captain John Milton Brannan seized control of the still incomplete Fort Taylor, preventing it from being taken by the Confederates. The fort played an important role during the Civil War as a center for Union naval operations and headquarters for the U.S. Navy’s East Gulf Coast blockade squadron, which prevented supply ships from accessing Confederate ports on the Gulf of Mexico. Although the fort was never the site of combat, many historians argue that Fort Taylor was a factor in shortening the Civil War. At one time during the war, nearly 300 Confederate sailing ships were being held in the harbor under the guns of Fort Taylor. 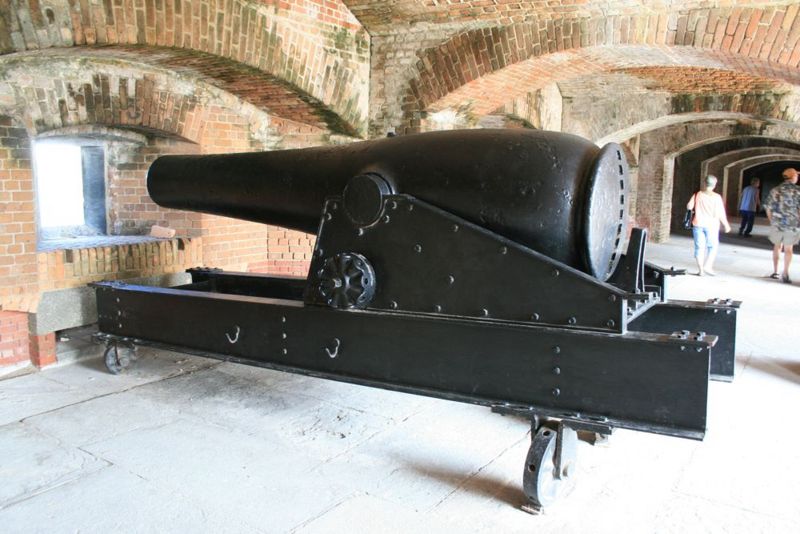 The fort was completed in 1866 and armed with 10-inch Rodman and Columbiad cannons that had a range of three miles. With 140 of these powerful cannons and large stores of ammunition, Fort Taylor prevented the Confederate Navy from making any attempt to take either the fortress or the island of Key West. The fort was also equipped with interesting and advanced design features such as sanitary facilities flushed by the tide and a French-designed desalination plant that produced drinking water from the sea.

Fort Taylor was modified in 1889 by the removal of the upper level on one side in order to accommodate the newer weapons of Battery Osceola and Battery Adair, which were installed on the inside of the fortress. The old Civil War cannons were buried within the new walls that protected these batteries. The fort saw much use during the Spanish-American War in 1898, and toward the end of that war, the walls of the fort were reduced to a single story on all sides. With the coming of the 20th century, more sophisticated weapons and eventually radar and other devices took the place of the artillery batteries. Even though the fort’s guns were never fired in a hostile engagement, the fort played important roles in World Wars I and II, and in the October 1962 Cuban Missile Crisis.

The Army took the fort out of service in 1947 and turned it over to the U.S. Navy for maintenance. In 1968, excavations by a volunteer group of history buffs led by Key West resident Howard England revealed Civil War guns and ammunition buried in long-unused parts of the fort and embedded in the walls built to reinforce Battery Osceola. The work done by England’s group revealed the fort as the site of the country’s largest collection of Civil War cannons, and Fort Zachary Taylor was placed on the National Register of Historic Places in 1971 and designated a National Historic Landmark in 1973.

Public tours of Fort Taylor are offered from 8:00 a.m. until dusk daily. Unique among Key West historic sites for its role in military history, the fort also hosts weeklong Civil War reenactments and a Civil-War themed Halloween haunted fort attraction. Fort Zachary Taylor is one of Key West’s most interesting visitor attractions. The park beach is nice, the thick brick walls and deep shade inside the fort can offer a cool respite from a hot Key West afternoon, and a day spent visiting is well worthwhile.